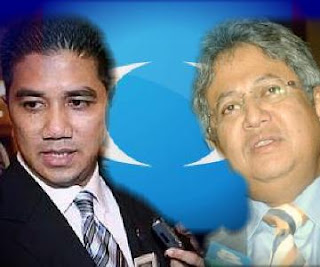 Zaid Ibrahim
Presiden PKR Yang Baru!
By : Wong Choon Mei, Malaysia Chronicle
As PKR officials confirm that fast-rising star Nurul Izzah Anwar has not qualified for the deputy presidential contest, speculation is rife that FT chief Zaid Ibrahim will challenge her mother for the No. 1 post - which he is bound to lose but insiders say is part of a final plan to leave PKR in a blaze of self-perpetuated glory and to cart away as much sympathy as he can.

"He knows he has burnt his bridges and he will go. Isn't it better to be remembered as having quit PKR after failing to win the presidency rather than to be remembered as just another loser in a four or five-cornered No. 2 race?" a veteran PKR watcher told Malaysia Chronicle.

In the past weeks, Zaid has shocked his PKR colleagues by unveiling a sinister side of himself that previously was hidden by his liberal speeches and remarks that struck a chord with a small but vocal group of mainly urban Malaysians .

Initially, PKR members thought Zaid's aggressive behavior was a combination of overreaction and a cat-and-dog rivalry against Azmin Ali, his main rival for the PKR No. 2 post. But as it became clear that he would fail to overcome Azmin, who received 102 nominations versus his 38, his behavior took a turn for the worse.
From Azmin to Anwar and even Nurul


Suddenly, he and his supporters began attacking de-facto head Anwar Ibrahim and even dragged Nurul into their verbal jousting against her dad. The 30-year is the daughter of Anwar and PKR president Wan Azizah Wan Ismail, and has been making waves of her own with a controversial but widely-praised series of articles entitled Malaysia or Malaysaja.

It was actually Zaid who put the idea in the public’s mind that Nurul was after the No. 2 post when he gave a press conference offering to withdraw if she wanted to contest. His offer took the party by surprise because Nurul had only just upgraded her ambition to go for one of the party's four vice-presidencies. Previously, she had only targeted the Lembah Pantai division chief's post.
Supporters of Zaid added to the commotion by hurling accusations that she was eye-balling the post as part of her father's 'greater plan' to perpetuate 'dynastic politics’. Pundits expect Zaid to use this as an excuse for leaving PKR.

“I don't know how some people got the idea that Nurul Izzah received three or four nominations. We even checked with her and she too did not know,” Malaysiakini reported election administrator Raden Shamsulkamar Raden Shamsudin as saying.
The die is cast

Indeed, Malaysia Chronicle reported on Monday that Nurul would not go for the No. 2 post, but would focus on the vice-presidency. She is up against party titans such as Fuziah Salleh, Lee Boon Chye, Tian Chua and Shamsul Iskandar Akin. It will be a surprise if she wins, although it may arm her with good, front-line battle experience for the future.
"If Zaid wants to chicken out of the No. 2 race, he will have to do so without using Nurul as a stepping stone. I can assure you she will only go for one of the four vice-presidencies. Zaid can as usual try to make himself more important than he is by announcing he will go the No. 1 post rather than slug it out and lose in the No. 2. But he is welcome to try. Wan Azizah is not in any danger at all," said a party insider had told Malaysia Chronicle.

Some PKR watchers had speculated that Zaid was trying to tarnish or even intimidate Anwar by hinting that he might go for Wan Azizah's post. Critics say the former Umno leader was becoming more like a loose cannon by the day, especially as the PKR historic direct election shifts into the voting phase.
“Zaid can say whatever he wants, but I can only base my decision on the official announcement from the headquarters on the eligible candidates," Nurul told reporters at the Parliament lobby on Tuesday.
Resignation soon

But the die is cast. It is impossible for Zaid - who is known for his pride and ego - to retrace his steps. Many PKR pundits believe his loyalties are no longer with their party or even the Pakatan Rakyat. They believe he will soon resign from PKR and announce the formation of a new third bloc.
"The signs are clear - it is impossible he can’t even make up his own mind whether he wants No. 2 or No. 1 position. Frankly, both are beyond him and he knows it but he is very ambitious still. To be someone’s deputy is not good enough for him. Even to head a party is not enough, he must have his own coalition," the insider said.

"We believe he has been very badly advised or influenced. But whichever devil is driving him now, we expect him to go for No. 1 and not No. 2. Either post, he will lose but after that he will announce his resignation. Of course, he will try to get as much sympathy as he can to further damage PKR and Pakatan. That is a given."