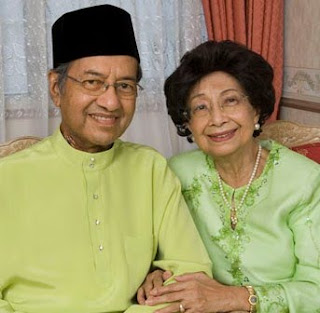 Mahathir Belum Mati!
Tulisan Terbaik Tun Mahathir
1. I would like to apologise to the students and others for failing to turn up to give the talk I had agreed to. I would also like to thank those who sent get well messages, fruits and flowers while I was in hospital in Melbourne. Honestly I feel I have lost an opportunity to meet and talk to what may be the future leaders of Malaysia. For this reason I am writing down here what would have been the contents of my talk.

2. The suggested topic for my talk was, "Are we ready for 1 Malaysia: Does Race Still Play a Part?" I will be frank but factual. My only interest is the country we all love. I am past self-interest. First let me refer to the slogan "1 Malaysia". Without the Government spelling out the precise meaning of 1 Malaysia, different people are giving their own interpretations which not only differ from each other but are in conflict with each other.

3. The Malays generally interprete 1 Malaysia to mean real adoption of the national language as the home language by every citizen as happens in other multiracial countries. They also expect the abolition of Chinese and Tamil schools and ensuring the private sector has a fair participation of Malays and other Bumiputeras.

4. The Chinese and Indians interprete 1 Malaysia to mean amendments to the constitution to eliminate provisions for the special treatment of the Malays and their protection by the Rulers, removal of the quota for Malays in the Civil Service, termination of the NEP, termination of the 30 per cent quota for Malays and indigenous people in business, termination of the quota for awards of licences, contracts and Aps. All awards to be on a competitive basis and open to all irrespective of race. They also expect perpetuation and maintenance of Chinese and Indian schools by the Government.

5. These two interpretations of 1 Malaysia admittedly are by the more extreme groups. The more moderate ones from both sides are milder in their expectations but their minimum intetrpretations still provide irreconcilable conflicts. 1 Malaysia clearly means different things to the different races. This is the present position and it is obvious that race still play a very important role.

6. Question: It is now more than 50 years since independence. For how long do the Malays expect to be treated as special and different from the other citizens? Answer: For as long as the Chinese and Indians prefer to be identified with their countries of origins. For as long as they want to keep their home languages and their schools.

8. This will take a long time. As the new contract will be between races, racial factors would be included. Unless both sides agree to give up their races' own rights as spelt out in the first contract i.e. the preservation of own home languages and schools etc. the rights of the indigenous races to their special position etc must remain a part of the new social contract. It is not certain that each would not demand for more than what they got under the old contract. It is likely there would be no agreement and no contract. Ths would lead to perpetual conflicts.

9. Question: So there will be no solution. The racial divisions and conflicts will remain. Answer: In Vision 2020 one of the objectives is to create a bangsa Malaysia. The belief at that time was that if Malaysia becomes a fully developed country, it would become very prosperous. This prosperity would be fairly shared between the races. There would be less jealousy between them. There would also be less fear of any race being dominated by any other race.

10. The political cooperation between the races would also be made more meaningful as loyalty to the country would override other loyalties. In fact non-racial parties would be the trend. It would take a long time perhaps - depending on fair wealth distribution. But once it takes off the pace will increase.

11. Malaysians of all races would be so proud of their country and its great achievements that the desire to be linked with other countries would be much diminished if not disappear altogether (as happens in prosperous multi-racial countries like the US - where the German, Eisenhower led the war against Germany. Eisenhower was American first and his country of origin was irrelevant to him).

12. The Malaysians at that stage would be Bangsa Malaysia first and always. The thing to do now is to ensure prosperity for the country and its fair distribution. Removing current rights of any of the races at this moment will only lead to racial conflicts which would obstruct prosperity.

13. Question: There are Malays in the opposition who condemn the NEP as unfair discrimination. Answer: There are also Chinese and Indians who appreciate what the Malays have done and support the NEP. They are not so vocal for obvious reasons.

14. One should look at the Malays who condemn the NEP. If they are politicians or supporters of certain parties their views are motivated by a desire to get Chinese support. They assume that they themselves would lead the nation and enjoy power and opportunities through Chinese support. But there will be a pay-back period. The support is not for free. The Malay leaders will be like Nizar (Jamaluddin) when he was Menteri Besar of Perak - mere puppets.

15. The non-politically educated Malays feel ashamed that they have to be helped. They would like to be recognised as people who succeeded on their own. If we study these people almost invariably they have benefited from the NEP. They appear to be ashamed of this.

16. They are ashamed to admit that they were unable to compete with the other races. I am not ashamed to admit that I cannot compete with the Chinese and Indian students when studying medicine. They had much better results than me and the other six Malay students for entry into the Medical College. Even at that time the British promised to the Rulers to help educate the Malays. I had my chance because of the affirmative action then. On pure merit I would not be a doctor today, not because I was not qualified, but my qualification was lower than others.

17. One has to remember that the Chinese civilisation is more than 4000 years old. No other civilisation has lasted that long. Naturally they have developed a culture better able to survive under all conditions. It is my belief that if the percentage of Chinese in the United Kingdom for example is the same as in Malaysia, UK would be better developed than it is now. It is not surprising that the Chinese excel in developing Malaysia (for which they are amply rewarded).

18. It is not shameful to lose out against them. Simply to catch up with them we need handicaps. To be given handicaps is to ensure fairness, not discrimination. That is why in golf you have handicaps. That is why in all contests there must be equality between the contestants. It is selfish if having benefited from the handicaps you want to deny others from having them. But when all is said and done, those who are given the benefits of handicaps must make honest efforts to use them properly. If they don't then they must forfeit the handicaps in the future.

Wake UP! said…
This article proved that you are as sharp as ever. Keep up the good work Tun.

Melayu Pasir Gudang said…
The true and fact article all Malaysian should read it.
October 13, 2010 at 8:29 PM

"SORRY I DONT LIKE UR PRIME MINISTER ..BUT MALAYSIA VERY LUCKY
U HAVE THIS MAN..IN 100 YEARS MALAYSIA COULDNT GET ANOTHER MAHATHIR.."

Anonymous said…
It's pure vintage by our beloved Tun, i would like to hear those in the cabinet comment on this, so far it looks like nobody in the MCA & Gerakan dare to comment on this subject also
October 15, 2010 at 10:30 PM