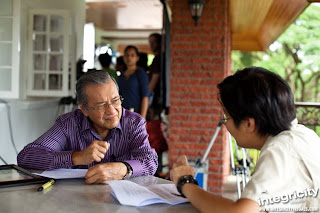 During Mahathir's years as prime minister he made extreme anti-Zionist and anti-Semitic statements, some of which achieved wide resonance. Mahathir nurtured anti-Semitism in a Malaysia that was without Jews. On 27 January 1981, in a speech in Saudi Arabia, he urged regaining the Palestinian lands by force since Israel was not invincible. He also, as will be discussed, vilified Israel at major venues.

In June 1983, Mahathir issued a statement attacking Israel for its incursion into Lebanon and calling it "the most immoral country in the world." In October 1983, at the OIC's Sixth Conference on Palestine held in New York, Malaysia expressed concern about Israel's renewed activities in Africa and called for their immediate halt. Malaysia opposed establishing Jerusalem as the capital of Israel and supported the resolution at the Jerusalem Conference of the OIC (New York, April 1984) to sever ties with any country that moved its ambassador to Jerusalem.

Malaysia supported the PLO more strongly than did any other Southeast Asian country. In 1969, Malaysia was the first Asian country to permit Fatah to open an office in its capital, which in 1974 became a PLO office. In August 1982, under Mahathir, this office was given full diplomatic recognition. Malaysia's foreign minister claimed that Israel should recognize the PLO before demanding that it recognize Israel. In May 1983, Malaysia hosted a conference on the Palestine question with UN funding and expressed anti-Israeli propaganda in its media. Yasser Arafat, paying an official visit to Malaysia in July 1984, was received by the king and spoke to a large audience.14 Sambung bacaan anda di sini...