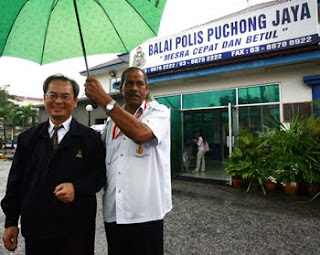 PETALING JAYA: DAP leader Ronnie Liu is under growing pressure to resign as Selangor executive councillor after being let off with a severe reprimand over the controversial letterhead issue. The pressure is coming from his own party leaders who are of the view that the party’s image can only be redeemed if he takes full responsibility for the questionable use of support letters in securing state contracts.

DAP life adviser and a co-founder of the party Dr Chen Man Hin said Liu, who is in charge of the state local government, study and research committee should ask his conscience and act accordingly.

“As the head of the local government (study and research) committee, he should know if there has been a wrongdoing. I leave it to his conscience to act as he sees fit,” he said adding that the issue had affected the party’s image and that the people felt there was something very wrong with the disciplinary committee’s decision.

The disciplinary committee issued a strong reprimand to Liu for the poor management of his portfolio and sacked municipal councillor Tee Boon Hock for misusing the letterheads. Liu has since pledged to exert greater control over the use of support letters for state contracts.

Jelutong MP Jeff Ooi said the “repair work” for the damage done has to come from Liu who is also Pandamaran assemblyman.

“Our share market has dropped because of this. The ball is in his court, he has to bear the consequences and take concrete steps to correct things.

“If we want to be seen as sparkling clean, we must walk the talk,” said Ooi who is also chief-of-staff in the Penang administration. Ooi said online opinions have been very negative on the matter.

“It matters to us because online opinion helped shape the politcial mileage for DAP in 2008,” he said. Selangor Speaker Teng Chang Khim, who made headlines for his “OMG, the real culprit let off” tweet, said the honourable thing for any professional who has been accused of wrongdoing was to resign.

“You don’t need to be a fortune teller to foresee how this will damage the party,” said Teng , who was the first to call for both Liu and Tee to resign. However, Dapsy chairman Anthony Loke said the question of Liu quitting did not arise at the moment but that he should buck up in terms of performance.

Party sources said Liu’s survival would depend on whether secretary- general Lim Guan Eng continued to stand by him. Lim’s silence on the issue has been read as tacit support for Liu who is his long-time loyalist. The party’s state elections have also been pushed from October to December for things to settle down before the contests for posts. Sumber : The Star