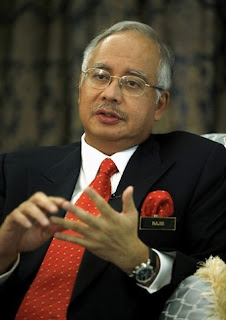 
KUALA LUMPUR, 2 April - Datuk Seri Najib Razak sidestepped a question tonight on whether he was a Malay or a Malaysian first in an interview on satellite news channel Al Jazeera, while defending Perkasa as “not so extreme.”“Well technically, if we talk about the constitution, I am a Malay but I’m comfortable being a Malay in a Malaysian society. And I want us to work towards becoming a truly One Malaysia society. But I’m proud to be a Malay. I’m proud to be a Muslim. But the fact that I’m proud to be a Malay and a Muslim, it doesn’t mean I cannot relate to others,” he told Al Jazeera’s Fauziah Ibrahim tonight when asked if he was a Malay or Malaysian first.

The question came after he was forced yesterday to defend his deputy’s declaration that he considered himself “a Malay first”, and only then a Malaysian. Responding to a challenge from DAP’s Lim Kit Siang, Deputy Prime Minister Tan Sri Muhyiddin Yassin had said earlier this week that it was not proper for him to identify himself as Malaysian first and Malay second.

The PM was also forced to defend his government’s policies amid criticisms from groups like Perkasa.“No I didn’t say they’ll be taken away,” he said when asked about opposition from Malay rights groups who fear their special privileges and their rights may be taken away from them.

“Perkasa is not so extreme, if you listen to them carefully. They can shout about Malay rights as long as they are not extreme in their views and you know to the extent that we can accommodate Perkasa. And we can accommodate also the non-Malays as well. I do engage the non-Malay groups as well, so as Prime Minster, I’ve always said I’m Prime Minister for all Malaysians.”

Tonight’s interview on Al Jazeera was conducted on the eve of the anniversary of his first year in office, and comes in the same week in which he introduced his New Economic Model (NEM) which he hopes will be the plank of his administration.

The PM was also asked tonight about the growing influence of Perkasa, the group which has been fighting for the current affirmative action policies to be maintained and which has the patronage of former PM Tun Dr Mahathir Mohamad.

“No, no, that’s not true. They are by and large supportive of Umno and they believe that Umno is the only vehicle that can really, not only promote Malay interest but really hold this country together. I think Umno is a strong party. Umno is well-established. Umno can deal with the emergence of Perkasa as well as other groups as well”, he said when asked about the recent warning from Perkasa to not make the group an enemy or risk losing their support.

Speaking about his 1 Malaysia platform, Najib denied that the special privileges of the Malays would be trampled upon. He said that 1 Malaysia was predicated on the constitution and provisions to protect Malay special rights. “I think if you implement things in a fairer way, you can reach out you know, to the Malays, to the non-Malays as well. “Don’t forget, when we implemented the New Economic Policy back in the 70s and 80s, and even in the 90s before the Asian Financial Crisis, it coincided with the growth rates in Malaysia being at break neck speed, you know 8 to 9 per cent was the norm in those days. So, New Economic Policy, affirmative action has never really hampered the growth of Malaysia into a modern economy.”

The PM was also asked about Datuk Seri Anwar Ibrahim’s sodomy trial, and reiterated the government’s stand that it was not a politically-motivated trial. “Well, I think we have to make people understand that it’s not the Malaysian government against Anwar Ibrahim. This is not a political trial. It’s about a young, well not intern, but a young officer chosen by him in his office, a 22 year-old man who feel very aggrieved, made a police report against his employer. And that was the genesis of the present case. It’s got nothing to do with the government. If that person did not make a police report, there’d be no case against Anwar Ibrahim,” he said. He added that Anwar’s trial now should not be compared to his first sodomy trial which happened when Dr Mahathir was PM. Asked if he thought that the first sodomy trial was political, he said: “I don’t think it was political, the first case. But there was maybe lack of corroborative evidence, if you like”