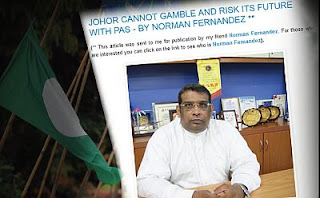 PAS HAS BECOME A REAL DANGER


Pas has not changed. Pas wants non-muslims to believe that it has changed. Thus, its make believe tag-line "PAS For All" and the image makeovers to portray itself as a progressive muslim party in a multiracial country. However, beneath this facade, Pas remains what it is. A fanatical, non-compromising,intolerant religious zealots with a an ultimate agenda to transform Malaysia into an Islamic state. Despite its overt show of tolerance, it coverts to rule over non-muslims who it regards as nothing more than godless infidels.

Being a coalition partner of Pakatan Rakyat and having accepted Buku Jingga as being the common ground for the political unionship with DAP and PKR, PAS then to achieve  its own agenda and is clearly prepared to work against the common good of its partners. So much for being in a "pakatan". Notice how PAS opposed Sports Betting and with DAP foolishly supporting PAS, it suddenly and suprisingly found an ally to its cause which ultimately made the government capitulate and cancelled the proposed Sports Betting. That was just the start for PAS. PAS began opposing the public sale of alcohol and again it succeded in having the sale of alcohol controlled in certain areas in Selangor, where PAS is in the Pakatan Rakyat government.

Then, there was the blanket opposition to cinemas in Bangi and Shah Alam. Also witness the regularity of their opposition to concerts by western artistes and the ability to find an excuse to oppose. From Elton John being a gay, J-Lo for her sexy attire, K-Pop and J-Pop to being a danger to young people's moral's to even opposing the world famous Gangnam Dance being a danger to Malaysian culture. Then, there is the annual moral alert and the policing by the serban brigade come Valentine Day, Halloween Day, New Year Eve celebration to even Mothers's Day. Finally, there is the Islamic state and imposition of hudud, a weather balloon regularly floated to keep the agenda alive and as reminder to non-muslims of the ultimate aim of Pas.


For PAS almost everything is alarming, sensitive, offensive, sexually arousing and western decadence. Thus everything is haram and larang.  What is sensitive in the eyes of muslim Pas  must immediately mean that non muslims become the sacrificial lamb and pay the price. Pas polices muslims as though it has been divinely appointed and also believes it has the right to be moral guardians for non muslims too. Pas will not accept that neither muslims and non-muslims have not appointed PAS nor wishes PAS to be their moral watchdogs.

The two latest incidents on the ban and issuing of summons to unisex hair dressing salons in Kelantan and now non-muslims being apprehended for khalwat in Kelantan should make non muslims realise that PAS is now a real danger to non-muslims and multicultural Malaysia. It calls for non-muslims to reflect deeply the effect of a PAS dominated government or even worst Malaysia under PAS. Non-muslims should think carefully.


For fifty years non-muslims have been under ketuanan UMNO/BN and the question is if non-muslims are willing to live the next fifty years under ketuanan PAS/Islam. It may be a road of no return. Be forewarned. PAS now is a threat to non-muslims and non-malays. PAS has yet to win federal power and they are already becoming a menancing danger. Imagine, although PAS has yet being able to achieve its dream to make Malaysian an Islamic state, with the little power the have as a partner in Pakatan Rakyat states, it is already trying to impose shariah into everyday life of both muslims and non muslims. Imagine, what would happen to non-muslims if PAS were to obtain power.


Fifty years ago, non-muslims were indifferent to the dangers of a political creature called Barisan Nasional and fifty years later Barisan Nasional has morphed into a rampaging uncontrolable monster. Its near impossible to rein in nor destroy this monster. Let's nor create another in PAS for the price non-muslims will pay will be greater and heavier. The time to stand up to PAS has come. Non Muslims can no longer be indifferent. I repeat PAS is a real danger. (Sumber klik sini).


JOHOR BARU: The number two man in Johor DAP has dropped a bombshell by dramatically urging voters to reject PAS in the general election, saying that the state could not gamble and risk its future with the Islamist party. “I, for one, have finally made up my mind and am convinced that PAS does not deserve my vote,” said Johor DAP deputy chairman Norman Fernandez. The senior DAP leader said “non-Muslims must realise that PAS will do what it has set out to do if it gains power”. “The question for non-Muslims is whether non-Muslims are prepared to risk it all with PAS.

“Johoreans and particularly non-Muslims must think hard and deep if PAS is really worthy of their votes,” he said in an article written for the blog syedoutsidethebox.blogspot.com yesterday. In the hard hitting article, he said “PAS' unilateral stand and the deep reluctance to be a true partner in Pakatan Rakyat and the unwillingness to subscribe to its ideals let alone agree and accept the common manifesto of PR must be enough to convince non-Muslims the grave danger of risking their votes for PAS.” When contacted, Fernandez confirmed that he had written the article, saying it was his individual view. The lawyer has been critical of PAS as he had also written in his blog in January that the “DAP can no longer be an apologist for PAS” and that it “must not be complicit to PAS' evil plans”. He had written that the “DAP must realise that PAS is no longer an honest, viable partner of Pakatan and must be courageous to admit it. In 1999, DAP took a courageous stand and once again DAP must take a stand.”

He reminded his members and voters that “the recent events in Egypt must be a reminder to non-Muslims”. “There, the people's revolution was hijacked by Islamist and having taken power, the Islamist have moved to subjugate non-Muslims and non-Muslims are fast losing their rights and identity in Islamist Egypt,” he wrote. Meanwhile, sources close to Fernandez said he was prepared to face the consequences of his article. They said he had taken a courageous stand on a matter of principle after studying the implications of a PAS-led federal government should PR win the elections.
at April 29, 2013