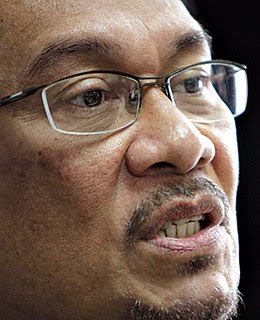 By Philip Dorling and Nick McKenzie

MALAYSIAN opposition leader Anwar Ibrahim's sodomy charges are the result of a "set up job" that the politician "walked into", according to an assessment by Australia's peak intelligence agency. A leaked US State Department cable reveals that Singaporean intelligence officials told their Australian counterparts that Mr Anwar engaged in the conduct of which he is accused, a claim he has steadfastly denied. Australia's Office of National Assessments (ONA) also states the conduct was the result of apparent entrapment by Mr Anwar's enemies.

The cable is one of several that deals with the explosive private views of senior Singaporean officials, including claims that: ■ Malaysia is in a "confused and dangerous" state due to incompetent politicians. ■ Thailand's political elite are dogged by corruption and the country's crown prince is "very erratic and easily subject to influence". ■ Japan is a ''big fat loser'' and Tokyo and Delhi were struggling to deal with China's influence due to their "stupid" behaviour.

The cable that deals with Mr Anwar's sodomy case, dated November 2008 and released to The Sunday Age by WikiLeaks, says: "The Australians said that Singapore's intelligence services and [Singaporean elder statesman] Lee Kuan Yew have told ONA in their exchanges that opposition leader Anwar 'did indeed commit the acts for which he is currently indicted'."

The document says the Singaporeans told ONA they made this assessment on the basis of "technical intelligence", which is likely to relate to intercepted communications. The ONA is also recorded as saying that Mr Anwar's political enemies engineered the circumstances from which the sodomy charges arose. "ONA assessed, and their Singapore counterparts concurred, 'it was a set up job and he probably knew that, but walked into it anyway','' the cable states. Sodomy is illegal in Malaysia and carries a jail sentence of up to 20 years.

Mr Anwar, a former Malaysian deputy prime minister, was jailed in 1999 on charges of corruption and sodomy after a falling out with then prime minister Mahathir Mohamad. He later had his sodomy conviction overturned and was freed in 2004. In 2008 he was charged again with sodomy. Mr Anwar has maintained the case against him is fabricated and trumped up by political enemies who fear his political resurgence.

The case against him, which is continuing, has drawn widespread international criticism and has included bizarre twists. Earlier this year, a prosecutor in the sodomy trial was dropped after she was accused of having an affair with the star witness. The witness, 25-year-old Mohamad Saiful Bukhari Azlan, worked as an aide in Mr Anwar's office. He has accused the 62-year-old of sodomising him in an apartment in Malaysia. In December 2009 Mr Anwar criticised then prime minister Kevin Rudd for not meeting him during a visit to Australia. Mr Anwar accused Mr Rudd of appeasing Malaysia's ''corrupt leaders'' by snubbing him. Sumber : WikiLeaks (baca di sini)